Why Did Jesus Ride a Donkey into Jerusalem on Palm Sunday? 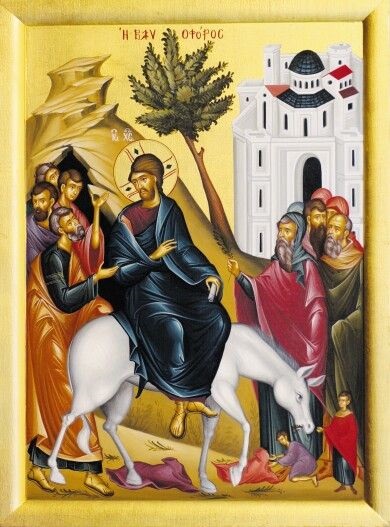 Why did Jesus ride a donkey into Jerusalem on Palm Sunday? I thought he usually walked wherever he went. Did he get lucky and have a friend who’d lend him the donkey?

The choice of a donkey was an important symbolic statement by Jesus.

Typically, when a ruler was going to visit a city, he would send word in advance. The rich men in the city would be expected to put together a parade, feasts, games, and other forms of celebration to welcome the ruler. It could be very expensive and was not always a welcome duty (especially in conquered countries). The festivities and the process of putting them all together was known as leitourgia or work of the people.   In ancient Greece, leitourgia was a public service that included more than just sponsoring festivals.  It was the way of funding the government services including those related to sports, religion, and military expenses. Today we use the term for the religious rituals of many cultures including Christianity.

In the case of a visit from the ruler to a community, it was expected that he would arrive in military dress and riding a chariot or a war horse if he was still vigorous enough to do so. He rode into town with his hand raised in a salute and all knew exactly who was in charge of their lives and fortunes.

The description of Jesus riding into Jerusalem on a  donkey, was seen as a claim that he was the promised Messiah, the one whose coming was foretold by the prophet Zechariah nearly 500 years earlier, “See, your king comes to you, righteous and having salvation, gentle and riding on a donkey, on a colt, the foal of a donkey (NIV).” (Zech 9:9)

In promising that the Messiah would come riding on a donkey, God turns the world and its ways upside down. Rulers ride chariots and stallions into town. They come with their armies and military force. Their coming is expensive and dangerous (if they are not pleased by the welcome). God’s Chosen One comes into town on a donkey, a beast of burden that may also carry women, children, and older men.

We don’t have any newspaper reports of the event. No photographers were there to record it for history, but all four Gospels include it. Jesus and his followers knew what such an action would imply, though John notes that it was only after the Resurrection that they came to understand it. They knew that he was at the very least claiming to be coming on a mission from God. It was one of the actions that led to his crucifixion as a traitor. And so when the story was told within the community of Jesus’ followers, they repeated this event in Jesus’ life. It helped explain who he was and what the new kingdom he came to establish was all about.

Peace and joy be with you,